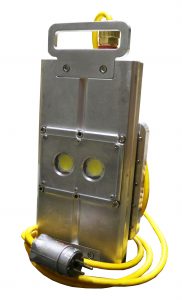 The ONLY 12 volt Hand-carried Explosion-proof Area Light on Planet Earth!

The TankPro Handy is virtually indestructible, as it is milled from a single block of solid aluminum, with no exterior rubber or plastic. You can kick it, beat it, drop it, slam it… it just won’t stop. Impact-resistant LEDs and corrosion-resistant aluminum ensure prolonged use. The TankPro Handy is IP66 and T4 rated, and operates in temperatures as high as 140 degrees and as low as -58 degrees Fahrenheit.
The TankPro Handy produces 7,200 lumens at only 48 watts. It's 5000k color temperature is ideal for tank inspection, as it is true to color, and mimics sunlight itself.
And don’t forget… the TankPro Handy is built by WorkSite Lighting right here in the USA. Need it serviced or repaired? No problem… Send it to us, and you’ll have a working light again in no time at all. Each one of our “Pro” series LED lights feature a 3 Year Warranty on all LED elements, fixture housings, and LED drivers.

Please provide a brief description of the product and information you are interested in.

"Their motto "We Make It Happen" is a true testimonial of the depth they will go to meet your business needs. Their staff is always readily available to assist you and their customer service oriented views is evident whenever we have an issue of concern."